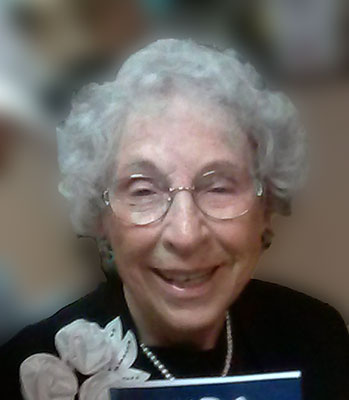 Helen Durham (also seen as Helen Elaine Duthie Armstrong-Durham) was a longtime member of the Guild and resident of Grand Forks for 62 years.

Helen was born in Medicine Hat Alberta, in 1917 and raised in Creston B.C. She married her husband Bill in Invermere in 1945 where she was the teacher at the one-room school. After moving to Grand Forks she became a teacher at Hutton and Perley schools.

Her talent was well rounded – she composed music, played the piano, wrote songs and plays as well as books. At one point in her life she had a set of marionettes which she would use to put on plays for school children.

Helen was one of the few seniors I knew who wasn’t afraid of technology – she was still acquiring new technology and using it to keep working late into, what for many would be, her twilight years. Even a stroke couldn’t really slow her down. Difficulties and problems did not daunt her – they were just obstacles to be overcome to Helen.

When the Olympics were going to be held in Vancouver and the committee was soliciting for a song for the opening she went ahead and composed one. She hired people to play the music and others to sing the lyrics. And got me to collect pictures, sound and video put it all together as a composition to submit.

When I was soliciting the community for videos for a contest to help promote the town to the outside world she did the same thing. She even contributed to the prize money.

She was the member of the group that would show up with multiple copies of sections of plays and when it was her turn to ‘read’ she would get everyone at the table to read the parts of a character or two from the play.

Sadly Helen passed away in 2019 at the age of 91. All we have left of her here in Grand Forks are memories and her books in the library. If these books are not borrowed . . . they too will pass from our grasp. The picture below is from the official launch of her book Kiba which IS currently in the collection of the local library. Consider borrowing to help keep it in the collection.